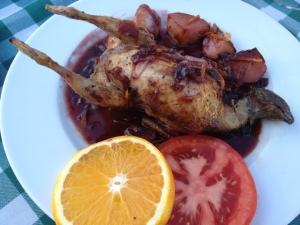 Even though we have our hearts and minds set on moving to France, we don’t really consider ourselves Francophiles. However, we do love many things about the French, in particular, their cuisine. So one of the things we really enjoy doing is cooking up a French meal together.

In the past 20 years, my husband has become somewhat of a gourmet chef. Suddenly thrust into the task of cooking for a family including two children ages 7 and 12 at the beginning of our relationship (since I didn’t really know how to cook), he found himself in the position of introducing them to a wider variety of foods. The youngest, being an especially picky eater, was quite a challenge, but now all these years later he has benefitted from a gradual exposure to many different foods and is happy to eat almost anything as long as it doesn’t have olives or mushrooms in it.

Ten years ago, when we became empty nesters, we found ourselves free of any “dietary restrictions” and living in a place where we could find just about any ingredient. So our interest in various cuisines grew. We have spent hours and hours being inspired by Julia Childs and our favorite French chef, Jacques Pépin, on TV and have purchased all of their books. At this point, my husband has honed to perfection his ability create an amazing dinner even without a recipe. Some of our favorites are his Herbes de Provençe Roasted Chicken, Foie Gras stuffed Quail, Duck a la Provençal, Eggs Cocotte, Pork Tenderloin Medallions in muscat wine and grapes, Lamb Chops with Persillade, plus a variety of gratins such as potato and cauliflower. He also prepares both savory and sweet soufflés and bakes several kinds of French breads. Though I generally serve as prep chef, I have finally improved my own culinary skills to a certain degree. I even have a speciality of my own, the Salade Niçoise, which my husband often requests. You might wonder how we eat this rich and heavy food without gaining lots of weight. Well, we don’t eat it every day and, like the French, when we do, we eat small portions and try to take our time. Eating slowly and putting your fork down between bites, which seems to come naturally to the French, is a challenge for Americans, but we’re working on it.

When we traveled throughout France two years ago, we stayed in a variety of gîtes (small, rural vacation homes), bed and breakfasts, and apartments. In every one of these places we encountered two items that we eventually realized seem to be French kitchen essentials — an electric teapot and a salad spinner — not what you might have guessed. Contrary to how you might perceive French cuisine as complicated and fussy, the French have learned to keep their kitchens simple and efficient. Further evidence of this is seen in the fact that cupboards are sparse or sometimes non-existent which is something that Americans cannot comprehend. I have found this to be true in much of my research on French homes for sale. Old and new alike, it is not uncommon to see a kitchen with very little storage space. However, things are changing little by little and from time to time you see a listing that advertises “mod-cons” — modern conveniences, specifically full-size (referred to as American) appliances and lots of cupboards. While I’m not opposed to this change in standards, I hope they don’t get too carried away in following our example of material gluttony. Keep in mind, that the average French home is much smaller than ours. Fortunately, we have learned to live quite happily with our 1389 American square feet, so the transition to a French residence won’t be so difficult for us. Nevertheless, we can’t deny that kitchen design and amenities are on the top of our priority list when searching French properties and planning for our ideal French kitchen.