Once upon a time in the early 70’s long before I ever learned how to cook, I was suddenly inspired to make a “fancy” dish while living in my first apartment. I think it must have been some sort of special occasion. Crockpots were very popular at the time. I’m pretty sure I got the recipe out of the little cookbook that came with my crockpot. The dish I prepared was Coq au Vin.

Until more recently with the advent of all the cooking shows on TV, Americans had a very narrow perspective on French food. Coq au Vin, Beef Bourguignon, Quiche Lorraine, French Onion Soup, and the ever present Fondue became culinary stereotypes and were considered haut cuisine. There also existed the notion that the French ate escargot and frog’s legs on a regular basis. As is common with the early adoption of ethnic foods in any country, especially the U.S., the dishes that people become accustomed to associating with a particular culture would never be found on a menu in their country of origin. They are typically country or peasant foods only prepared at home. When I was in college, I remember a friend’s parents came to town and took us out to a local, well-known French restaurant — quite a treat when you had been eating nothing but dorm food for months, but my French culinary experience was limited to French Fries and French Toast which I would later come to know as Pommes Frites and Pain Perdu. They recommended I order Chicken Cordon Bleu which sounded very impressive but didn’t taste all that great. After that meal, I had very little interest in trying French food again. Of course, I had a lot to learn.

Today, 40 years later, I have been fortunate to have had the opportunity to develop a much more sophisticated palate. Through travel, friends, relatives, and my husband’s knowledge and ever-evolving culinary pursuits, I have learned to appreciate a wide variety of truly authentic foods from around the world. Preparing and tasting new dishes is an adventure no less enticing than boarding a plane for a foreign land. In fact, you can learn about a country and its culture from its cuisine.

So, what about that Coq au Vin? The dish originates from the Burgundy region and is considered French comfort food. Initially, it was a basic peasant dish that farmers would prepare with whatever old fowl they had on hand — typically a rooster or “coq”. The purpose of the large amount of red wine in the recipe was to break down or tenderize the old meat. Traditionally, it was finished with the blood of the rooster along with brandy and vinegar to prevent the blood from clotting. Nowadays, the recipe has been adapted with a more modern take and chicken is usually the bird of choice. We learned all this a few weeks ago when we endeavored to find something different to make for dinner and decided on Coq au Vin. Often while Norman is busy prepping a recipe, I’m online doing research about it. Going beyond the ingredients is the kind of thing we like to do when we are cooking. It makes the enjoyment of the dish infinitely greater when you understand it completely.

And that rooster you see everywhere in France? The history of the rooster as a symbol of France is long and complicated. As it happens, the Latin word for rooster is gallus as is the word for Gauls (Gallus), the people who originally inhabited much of France. Though they have nothing to do with each other, the play on words was irresistible to some in ancient times and used to make fun of the French. The entire explanation of the connection has undergone many iterations. Eventually, the French themselves took up the symbol and adopted it with their own interpretation. The Gallic rooster, named Chanteclair for its song, evolved into a French emblem now often used as a mascot for soccer and rugby teams as well as in the logos of various businesses.

It has been a long journey from one Coq au Vin to the next. Who would have guessed I would end up at this juncture seriously considering a move to France? 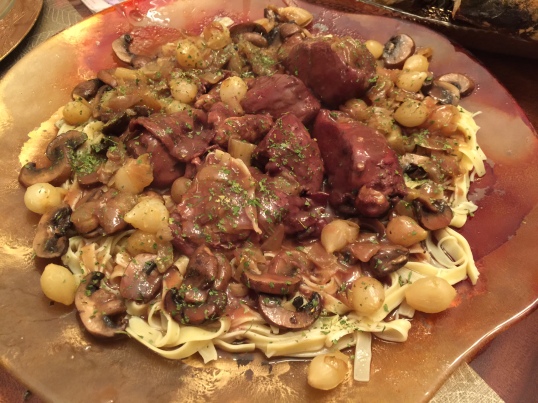