Everyone has a favorite place for special occasions. For the past 12 years (and long before that whenever we were in town), ours has been Shadowbrook Restaurant in Capitola, Ca. Superior food, superior service, superior and very unique atmosphere — all for amazingly reasonable prices. The fact that they have been in business for the past 70 says it all. We have celebrated dozens of birthdays, anniversaries and other special events at Shadowbrook — most recently my retirement — all of them memorable. It’s also where we have taken out-of-town guests and they never failed to be impressed. Their tag line “There’s no place like Shadowbrook” couldn’t be more accurate. I doubt we will find its match anywhere. Nevertheless, in the spirit of adventure and new experiences, we set out to explore the possibilities in Eugene. 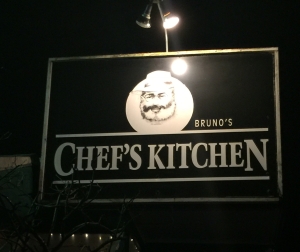 As I understand it, Portland has become quite the foodie mecca in the past few years. Based on our experience so far, I would venture to say that Eugene is not far behind. One of the places we discovered that serves well for those special occasions is Bruno’s Chef’s Kitchen. Run by chef-owner, Tom “Bruno” Bollag, it started out 15 years ago as a healthy fast food drive through and by demand eventually evolved into a full-fledged restaurant. Bruno grew up in Switzerland and his cooking is influenced by his father who was a cook, his Italian mother, and all his travels throughout Europe. His specialty is sauces and because his restaurant is small (about 15 tables), he makes each and every dish individually to order. The menu varies from week to week and he tries never to make the same thing twice. Like so many chefs in this area, he focuses on using local ingredients and developing his menu based on what’s in season which is pretty much how everyone cooks in Europe. One evening on our first trip to Eugene, we lingered over a sumptuous meal of generous proportions at Bruno’s. As a starter we enjoyed steamer clams followed by Scaloppine and Limone (pork tenderloin cutlets with caper lemon butter brown sauce and saffron rice) for Norman and Lamb Curry with Plum Chutney for me. By the end of our meal which concluded with a dessert we could barely manage but couldn’t resist, we knew we had found our special occasion place in Eugene. 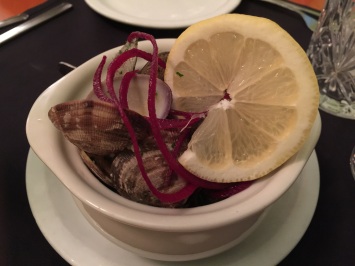 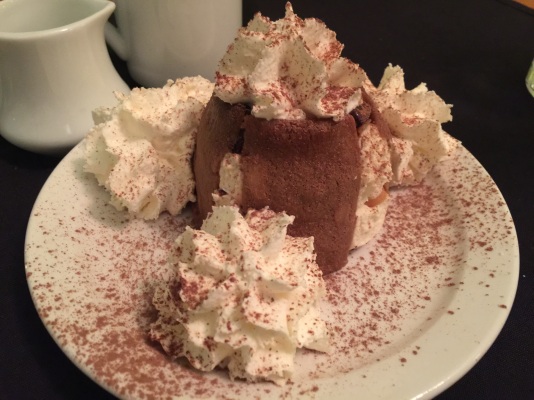 A truly complete surprise waiting for us in Eugene was a little piece of French heaven in the form of a restaurant called Marché and its adjacent gourmet food market, Provisions. Texas-born founding chef and owner, Stephanie Kimmel, started her culinary career in 1972 and established Marché in 1997. She benefits from much travel throughout her life as well as the study of French culture at the Sorbonne in the creation of her menus and techniques employed in the preparation of dishes using regional and seasonal ingredients. What she and her staff deliver is an outstanding, authentic French dining experience. You can even practice your French while you are there if you are so inclined. Marché offers a variety of ways to enjoy its cuisine from brunch to lunch, dinner, and a bar. To round out your French experience, after your meal you can head over to Provisions where there is a bistro, deli, and a gourmet market where you can find ingredients for those French meals at home. Additionally, Marché hosts a French Regional four-course dinner once a month complete with wine pairing. Once again, this is another special place with remarkably reasonable prices. This week we are joining in for an evening in Paris. Next month, off the the Loire Valley. So, you see, even though we didn’t make it to France for our retirement, we will still be able to partake of its pleasures in some small way here in our new hometown of Eugene. 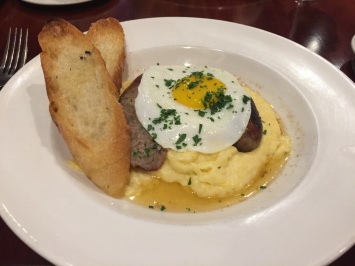 In keeping with our the desire to continue our ever-evolving culinary endeavors, it was essential to determine what potential resources there might be in Eugene. During my extensive research, I discovered a couple of gems that we tried out on our first trip. Based on many further investigations around the city since we have moved here, I’m pretty convinced these are the “go to” places for all manner of surf and turf. In both cases, you can eat in, take out, or buy fresh to cook at home. 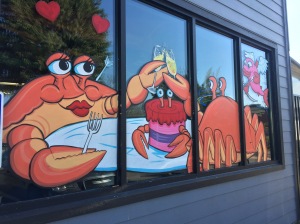 We love seafood, but even living near the California coast as we have much of our lives, unless we went right to the dock, most of what we could get was frozen or had been previously frozen. Fisherman’s Market is owned and operated by two Alaskan fisherman, Ryan and Debbie Rogers, which gives the place a certain level of credibility when it comes to fresh fish. Here you can buy live crab as well as fresh salmon, scallops, and whatever else is in season. That’s the key — buying what’s in season. When we first ate here in February, it was crab season. Norman had his first fresh crab ever and it was truly amazing. Since then we have tried other traditional seafood items on the menu such as fish and chips (choices are cod, salmon, mahi mahi, scallop, & shrimp) calamari, crab cakes, drunken clams, and crab cocktail. They make the best clam chowder we have had anywhere. They also serve an array of seafood sandwiches and salads. 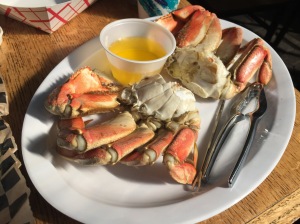 There are no less than six cocktail sauces from which to choose to garnish your meal, but they’re not really necessary as everything is so delicious on its own — hot, clean, and fresh from the fryer. Best of all, everything is so reasonably priced. To top off that fact, recently we discovered we could order off the “Kids and Seniors” menu. Lunch for two for $7. What a steal! Ah, the benefits of being “older”.

Noteworthy… Fisherman’s Market was featured on Diners, Drive-ins, and Dives of Guy Fieri fame. Check it out if you are ever in town! 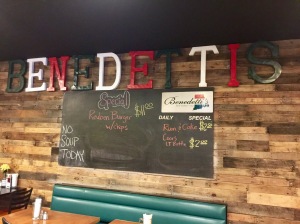 This market is actually located in the neighboring community of Springfield, home of the Simpsons. James Benedetti, originally from Rhode Island, opened his market in 2009 and eventually hired his partner, North Bend Oregonian, Mike Richardson as chef for the restaurant. Though not completely local as they contract with Cedar River Farms in northern California for all of their meat products, they focus on preparing dishes with the highest quality ingredients at moderate prices. While not in the fanciest location (a strip mall), the atmosphere is rustic and inviting and the food is definitely delicious. Upon our arrival in Eugene in February, we enjoyed two super generous and satisfying selections from their every-changing lunch menu. Norman had an Italian Grinder like no other and I had a creative take on the BLT, the Smoked Pork Belly BLTA (A = avocado). Whoa! We couldn’t eat this every day, but was it ever tasty! 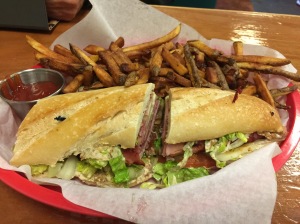 To compliment your meal, there are local beers on tap, Italian wines, and a full bar. Before we left, we perused their deli which featured absolutely beautiful cuts of all kinds of meat and sausage prepared in house at extremely reasonable prices. Recently, we returned to purchase a rib eye for dinner at home along with a variety of those sausages. All were incredibly tasty and tender. They don’t have a website, but you can follow them on Facebook to stay tuned for their daily specials.

Above all else, what we noticed about both of these places as we have everywhere in Eugene is that everyone is so welcoming and friendly. Coming from the rat race of the Silicon Valley, it’s rather refreshing to say the least and makes us really happy we have chosen this city for our retirement.