From Rain to Shine 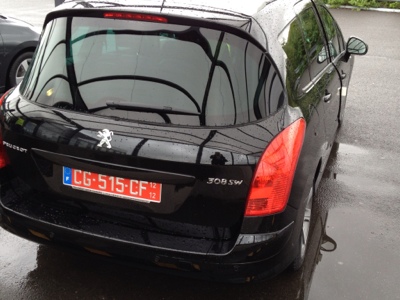 Often when you plan to do things in your travels, it’s more complicated than you think it will be and takes a lot longer than you expect but it’s usually worth it. On the last day in Paris, we needed to go to the airport to pick up the car we were leasing for the 5 weeks of our trip we would be driving throughout France. Since we did not want to drag our luggage through the streets of Paris again, we thought it would be more convenient to leave it in the apartment and get it on our way back with the car. The airport is north of Paris and we were heading south so passing back through Paris was unavoidable anyway.

We set our alarm for 6 AM to make sure we got an early start. We had promised to be out of the apartment by noon and we figured this would give us plenty of time. We made breakfast so we could use up the last of our fresh groceries and be fortified for the journey. After doing the last of the cleaning, we set off to the Metro station at 8:15 connecting to the RER train for the 45 minute ride to the airport. Of course, it had to be the coldest and rainiest day of our entire week in Paris making travel a little slower and more difficult than usual. Eventually, we arrived at Charles de Gaulle Airport at 10:00 as planned. Next, we had to find a public phone (per instructions from the car leasing company), figure out how to use it, and call the company so they could pick us up in their shuttle. They told us to wait at departure Door 2. Being fairly unfamiliar with this gigantic airport, we made our best guess and chose Halle 2. After a few minutes, it dawned on us that this wasn’t the right place so we found our way to departures and went outside. Time passed and no shuttle appeared. Ah! Once again we realized we were still not in the right place. We were standing at Door 16! By the time we found door #2, it was 10:45. Norman went back inside to call the company — surely they had missed us. They instructed us to go to the nearest information desk, have the attendant call them, and wait for them there. FINALLY a young man showed up and escorted us to their shuttle.

Once at the car leasing agency, things progressed fairly smoothly in picking up the car. This type of leasing for Americans driving in Europe is a really good deal especially if you are staying three or more weeks. You can’t even beat the cost of the car with Eurail tickets which don’t really provide daily travel or access to out of the way places. We had arranged for a brand-new Peugeot Sedan. It’s very luxurious and comfortable and gets better mileage than most American cars. It has automatic everything you can think of plus GPS which was briefly explained to us before we took off — programmed by another young employee to get us back to the apartment. The car comes with very little fuel so we were handed a map with directions to the nearest gas station. Unfortunately, the gas station stop was not programmed into the route and the map was far from accurate so we missed the station completely. Before we knew it we were enmeshed in heavy midday traffic heading into the city with no gas station in sight. We were pretty sure our AAA coverage didn’t extend to Paris so we had to find gas somewhere. The signs at one exit seemed to indicate a gas station in the vicinity so we got off but just ended up going around in circles and ending up back on the freeway. We held our breath and hoped the gas would get us to the apartment.

We made it to the apartment but as we had anticipated, there was no place to park on the narrow one-way street. So Norman parked in front of the building’s garage exit door and hoped no one would be leaving home soon. He waited with the car while I made a few trips back and forth with the luggage. We got lucky, got the car loaded, and got out of there. Still no gas in the car though and it had already warned us twice that fuel was low. We had directions to the nearest gas station but it was still raining and driving in Paris under those conditions in a car you’ve never driven is no pique-nique! Alas, we passed it up — a little tiny storefront kind of gas place with one pump you would never recognize as a “gas station” — a little tiny turn in right off a busy, main street — and if someone is already there, you’re out of luck. After parking around the corner and figuring out how to get back to it, we were finally successful — fill’er up — €82 ($102), ouch!! Well, it was completely empty and it has a 60 liter (16 gal.) tank. So that’s about $6.37 per gallon. In a pinch in the middle of Paris that’s to be expected. At least we weren’t standing out in the rain waiting for a tow truck. 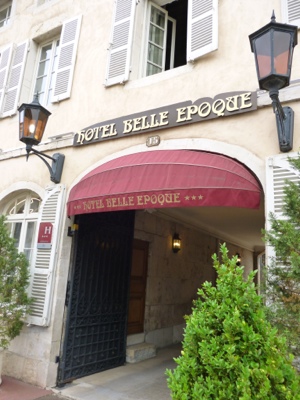 At last we were on our way to Beaune in the heart of Burgundy. As we drove south, the rain began to subside and the sun began to shine. What a welcome relief from the cool, wet weather of the past week! By now we were using the GPS more or less successfully and glad to have it. It speaks to you in a woman’s voice with a British accent — sort of like the one in James Bond’s cars. We’re trying to decide what to name her. Maybe one of our favorite Bond Girl names. Beaune is an old, fortified medieval town surrounded by a stone wall. You have to navigate the “ring” road which goes around it in only one direction. After many twists and turns through various roundabouts, our girl got us to our hotel, Belle Époque. It was 5 PM. The gentleman at the desk quickly showed us to our room explaining that they had to make some sort of change and give us a different room than we requested. This one he said was “a little big”. No kidding!! When he opened the door, we walked into our own little chateau — two stories with a spiral staircase leading to three bedrooms, a beautifully tiled large bath, and a walk-in closet. The walls were covered in a typically French patterned blue brocade and the slanted roof on the second floor was hung with miniature chandeliers. We were speechless! A shining end to our long, exhausting day… at Chateau Bleu.

3 thoughts on “From Rain to Shine”