The Route to Anywhere 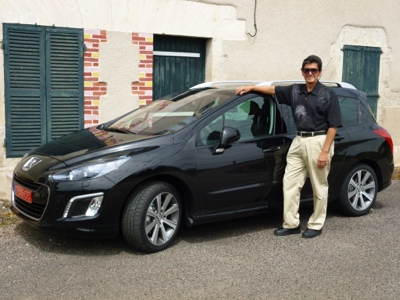 One of the reasons we chose to travel throughout France in a car was because it is the best way to experience any location that you wish to visit. Driving is not for everybody, however, and there are many things you have to do to prepare in order to minimize any potential problems you might encounter.

First of all, let me preface the following with the fact that I (Norman) have previously driven through France, Italy, and Spain (although it was more than twenty years ago). The one thing that is very important to learn if you do decide to drive in France, is what the various road signs mean. There aren’t many, but it is vital to recognize what appears along the roadway. Another is that in many European countries, the “roundabout” is a very common feature encountered at major intersections in large cities, small villages, and even out in the countryside. You merge in and out of a roundabout so it is important to signal your intentions when you enter and are about to leave the roundabout. Signaling your intentions assures that everyone knows what you intend to do.

I have driven in very heavy and congested traffic in Paris, Lyon, Annecy and many small towns and villages. Keep in mind that many of the old city’s and especially the villages’ roadways were built for ox carts, not cars! The streets are narrow or windy or both and turning into side streets can be very sharp and short. Many smaller villages have few if any sidewalks so look out for pedestrians and bicyclists. You will also be sharing very narrow roads with 18-wheelers coming your way! So slow down and squeeze on by. They will be doing the same. I have to say that even in the heaviest congestion, almost all drivers have been calm, considerate, and courteous. When driving on two-lane roads, stay to the right (even if there is no one behind you). I learned rather quickly that cars that seemed to be far behind you caught up to you much more quickly than you thought they would. Also, in France, you can only pass a car on the left even if you are on the right-hand lane of a two-lane highway going in the same direction with no car in your lane in front of you. Many times I have seen cars going down the right-hand lane and as they catch up to a car in the left lane, they will slow down and switch to the left lane behind the slower car expecting it to move to the right-hand lane. So don’t dilly-dally; move and stay in the right-hand lane even after passing. Look out for speed traps. You will recognize them when you see a sign telling you that “for your protection, your speed will be monitored” (in French of course).

Gas prices in France are some of the highest in the world. It is not that the price of oil is higher for the French (as compared the the U.S. for example), but that the government adds a hefty tax to every liter of gas (as much as 70%) — enough of a tax to make the price equivalent to about $6.50-8.00 per gallon. Why such high taxes? Taxes collected from the sale of gas for motor fuel pay for the very extensive and excellent roadways. Every paved road we have been on was in excellent shape. When driving through tunnels and over long spans of bridges, they too were very well-maintained. Even when driving down what seemed one-lane country roads far from anywhere, we have noticed how good the quality of the roadways have been. As with everything, there is a price to pay for quality. I don’t think the French complain too loudly about the price of gas, given the excellent quality of their roadways. The French are a practical people and will walk, bicycle, or take public transportation before they needlessly spend money on gas.

Keep in mind other expenses you will encounter if you plan to drive between two distant locations…toll roads. There are many throughout the country. You probably can get from one location to another by taking non toll roads, but be prepared to take a lot longer getting there. Sometimes you might double the length of your drive time if you decide not to take the toll road. Tolls roads can be expensive, but there is no more direct route from one place to another. On the other hand, when we took non toll roads on side trips, we got to see some very beautiful landscapes, country roads, and many charming villages. Another expense is parking. By planning ahead, you can use inexpensive or even free public parking lots.

The last piece of advice I can offer is to use the Internet as much as possible when planning your travel. We have been able to get very detailed information on almost all our destinations that pertains to driving via the Internet. Parking information, rates, driving directions, locations, number of parking spaces, security, etc. can be had ahead of time on your mobile phone or iPad.

All in all, I’d have to say that having a car is the best way to see the country. You can get to places that are either inaccessible by public transportation or would be arduous to get to at best. However, driving can be stressful, so plan ahead, get informed, and stay frosty.