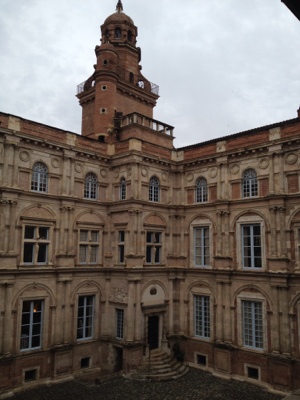 Traveling from Provence across southern France to Spain, we needed an interesting stopover that might provide a still different perspective of French life. We chose a short stay of three days in Toulouse, France’s 4th largest city and the capital of its aeronautics industry. It’s nickname is the “Pink City” due to the fact that much of the brick architecture is a peachy color which looks pink in the sunlight especially at sunset. University students make up a quarter of Toulouse’s population creating a lively, young atmosphere — quite a contrast to and a refreshing change from Provence which is filled with retirees.

On our last night in Le Paradou, we had planned to go out to a specially recommended restaurant, but when we researched it more, we discovered it was a popular hangout for the rich and famous. In fact, the French singer, Charles Aznavour, frequently dines there. Because of all the publicity, we felt it might be a bit overrated and we really wanted to avoid that scene so we decided to wait until we got to Toulouse. On our first evening here, we ventured out to Place du Capitole, a square in the city’s center, and witnessed for ourselves the peachy-pink colors cast at sunset on the grand city hall building known as Le Capitole. In this square there are a multitude of brasseries, one of which had come to my attention — Le Bibent, developed by well-known chef, Christian Constant who hails from the an area in southern France near Toulouse. It was obviously a very popular place, but we were lucky to find an available table on the patio overlooking the square. With a menu of regional offerings created from local products, we were able to enjoy some delectable dishes. Ironically, about half way through our meal, a little old man looking strangely familiar exited the restaurant and immediately attracted a crowd. It was none other than Charles Aznavour — in town to help host Le Marathon de Mots (the Marathon of Words), a celebration of authors, poets, and novelists. So it seemed we could not dodge the rich and famous after all.

Yesterday we made a short trip back to the city center via metro to visit the Fondation Bemberg. This magnificent building constructed for a wealthy merchant around 1555 houses the collection of Georges Bemberg who donated over 300 works of art from many periods of history including a large number of paintings by Pierre Bonnard. It is a small venue which makes viewing the artwork a very intimate experience. Afterwards, we discovered a very affordable menu du jour on the museum’s small covered terrace. This sort of offering generally consists of a salad or appetizer + a main dish or a main dish + dessert and sometimes a drink for one price. It is always the best and most economical way to eat your main midday meal if you can find it when you are hungry — a challenge for Americans as our stomachs run on different clocks than the French. It is served between noon and 2:00 or as late as 4:00 in some cases. Fortunately, we caught this one just in time. 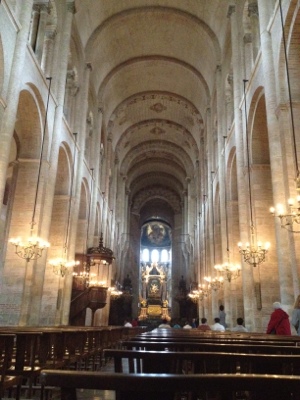 Our last stop for the day was the Basilique Saint Sernin. We were mostly interested in seeing this church because it is reputed to be the largest, finest, and purest Romanesque church in Europe. It was built in the 5th century to honor St. Saturnin, the first bishop of Toulouse who became a martyr in 250 after being dragged though the streets by a sacrificial bull. Ouch! It is also a major part of the pilgrimage to Santiago de Compostela. Sitting inside and admiring the massive, towering arches, it is very difficult to imagine the construction of such an immense structure in those early times. Truly impressive.

Today we finished off our stay in the pink city with a visit to Airbus City just outside Toulouse. Our tour focused on the construction of the Airbus A380, a double-decker jetliner which holds the title of world’s largest passenger plane. It debuted in 2007 a joint-venture between France, Spain, Germany, and the UK. We had the opportunity to learn how the prototypes were tested and see some of the plant facilities as well as view several planes on the tarmac just about ready for delivery — 3 of which were designated for Emirates Airlines toward their total order of 90 — one for each sheik I suppose. They only cost $389 million dollars each! Depending on the configuration, they hold anywhere from 525-853 people. Each plane weighs over 550 tons fully loaded. At that weight it’s hard to believe they can stay in the air. At the end of our tour, we were allowed to sit in a section of the body of an original prototype, but we were disappointed that we didn’t get to take a test flight. Top security on this tour — no photos allowed.

Tomorrow we are headed off to Spain to explore the Basque Country with a stopover for lunch in San Sebastian. We look forward to sharing again with you soon.

One thought on “So Toulouse”