Of all our adventures together in the past 24 years, our most cherished ongoing adventure has been our marriage. Yesterday was our anniversary and we were thrilled to be celebrating so many happy years together with breakfast at our local French restaurant, Marché, followed by our customary coffee, chai, and pastry in their Provisions bistro. Later we enjoyed a dinner of duck breast and risotto prepared by my absolute favorite chef, my husband. When I realized we had forgotten to pick up dessert, I quickly whipped up an Apricot Clafoutis. Yes, we blew all the calories we “earned” at the gym this week, but our anniversary only comes once a year. No matter how we greet this day, we always reminisce about how amazingly well this adventure began.

On November 8, 1997 we took our vows under a white gazebo on the lawn of the famous Palm Springs Racquet Club, a resort opened in 1934 by actors Charles Farrell and Ralph Bellamy and frequented by all the big Hollywood stars. When we checked out this venue for our wedding, its popularity had severely declined, but it was still being well-maintained. We were planning the wedding ourselves on a budget and did we ever get a deal as they were happy to have the business. We stayed in the Mary Pickford bungalow where we were able to host all of our family after the wedding late into the night. Our reception was held in the Humphrey Bogart Room. There were even Bogart stamps issued that year which we used on our handmade tuxedo invitations. I made my dress and my dad, age 75, walked me down the aisle like I had always wanted him to do. Norman built two pedestals for each side of the gazebo to support tall ceramic vases he made which were filled with Stargazer Lilies by students from the ROP floral program in my school district. He also created over a dozen candle holders as well as smaller flower vases to decorate the tables at our reception. The cake was simple, but delicious from a local grocery store bakery decorated by additional Stargazers when it arrived. We spent a good portion of our budget on a mariachi that played for both the wedding and the reception. We didn’t have an official photographer in this pre-digital age so we don’t have a lot of photos but, boy, do we have incredibly wonderful memories of this event. It was certainly a dream come true for me.

We’ve celebrated our anniversary in various special ways every year, some more extravagant than others. Here we are in Lake Tahoe on Anniversary #10… ah, we were still so young. This photo was taken by a professional photographer who just happened to be on the scene and offered to do it for us. 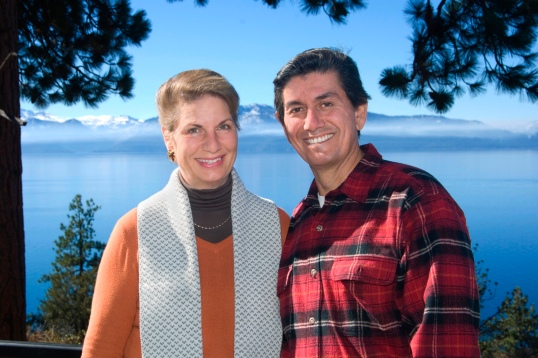 Last year, we completed two decades of marriage and splurged on a stay at the Whale Cove Inn on the Oregon Coast. Selfie time…

This year, I suggested we take another selfie, but as we are getting back into our photography with a new kit, Norman insisted we do it properly. So he set up our equipment and took about 20 or so shots of us. He finally got one we were both happy with then did some editing and voilà… here we are on Anniversary #21. We enjoyed yet another special day together doing things we love and hope to be fortunate enough to celebrate many more anniversaries to come.