The Two Faces of Valencia

During our short stay in Valencia we experienced the glory of the “old” and the innovation of the “new”. In this post, we will share some of that with you.

Like most Spanish cities large and small, Valencia has an historic “old town” area located in its city center. With a metro stop right outside the door of our apartment near the beach, we took an easy 30-minute ride into town to visit Valencia’s Ciutat Vella (old city). Here the streets are narrow, plazas are many, and massive buildings display an array of architecture from Roman to Modernist. The first stop was the Plaza del Ayunatmiento where you are surrounded by some impressive structures dedicated to the business of government that include city hall and the central post office. 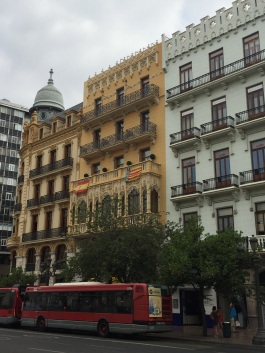 Next we came to the Plaza de la Reina originally conceived in 1878 as a plaza Mayor, or central plaza for the city of Valencia. In fact, it is kilometer zero for all streets in Valencia as well as the starting point of reference for numbering all buildings. Located here are the offices and shops of many of Valencia’s most well-known companies. It is also the site of the first traffic light in Valencia which was installed in 1930. 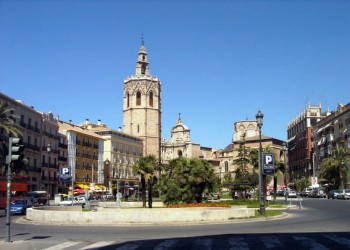 Finally, we arrived at the Plaza de la Virgen, site of Valencia’s renown gothic cathedral. The majority of the buildings surrounding this plaza are of religious significance.

Not far away, our last stop of the day adding to our list of public market visits — the overwhelmingly large Mercat Central with its intriguing Art Nouveau design.

La Ciudad de las Artes y las Ciencias (The City of Arts and Sciences) is a futuristic complex of buildings constructed on the former Turia riverbed between 1991 and 2006. The goal was to create an attraction that would draw tourists to Valencia year round. The complex includes a science museum, a planetarium, an aquarium, an opera house, and several other modernistic architectural structures spread over a vast area making it impossible to cover in just one day. So we chose our favorite and headed to the Oceanogràfic, the largest marine park in Europe. 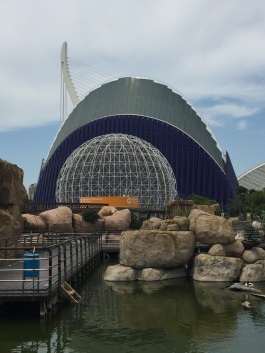 It was so refreshing to be surrounded by new and modern architecture and even more so to have such an up close and personal experience with many different species such as the beluga whales, sharks, and especially the dolphins.

2 thoughts on “The Two Faces of Valencia”