Next stop in Andalucía… Córdoba. While the previous city of Granada had a population of about 230,000 people fitted into a mere 34 square miles, the city of Córdoba spreads out over 484 square miles with 325,000 residents. If you do some quick math, you realize that there’s a great difference in population density in these two places. This along with the fact that the land is relatively flat in Córdoba creates a much more open and spacious feeling.

In Granada, sitting on the patio of our modern hilltop apartment in the ancient Albycín neighborhood, we certainly enjoyed the view and appreciated the unique beauty of the area. 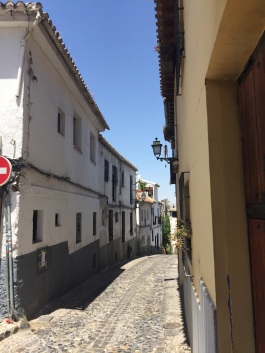 However, Córdoba was a completely different experience. We had our own private two-story, three bedroom casita with surrounding gardens and pool situated behind gates on the property of some incredibly generous and gracious hosts. Every afternoon, we spent hours by that pool. It was such a delight and a bit of a welcome relief from the congestion of Granada. We found it quite easy to get around on the local bus and very comfortable to be out and about exploring. 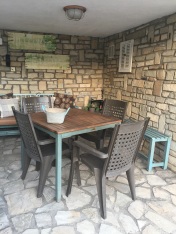 And what did we discover? The other iconic Andalusian landmark commonly referred to as “La Mezquita” (mosque), another curious example of the melding of religious and cultural influences that has occurred over centuries of Spanish history and one of the best examples of Moorish architecture. Currently serving as a Catholic Cathedral, the Great Mosque was built on top of a small catholic basilica in 784, eventually reconverted into a Catholic Church during the Spanish Reconquista in 1236 and finally given a Renaissance remodel in the 16th century. The result is an intriguing structure with architectural features of its various predecessors still present. With each new iteration of this monument, little effort was made to tear down the old so a jumble of different architectural features on are still in place. The most notable feature is the seemingly never-ending multitude of stone columns joined by distinctive red and white arches providing the classic photo op.

Ancient monuments are not the only draw to Córdoba. On our second full day, we set out on the bus to explore some of the modern downtown area. We encountered beautiful parks and plazas as well as wide, inviting avenues. It was here we had our first “Corte Inglés” experience… something I had been wanting to do for a long time. I learned about El Corte Inglés when I first became friends with The Spaniards. It is Spain’s only remaining department store chain, the largest in Europe, and third worldwide. It’s comparable in quality and price to Nordstrom in the US with the requisite, very affordable cafeteria generally on the top floor and often with a great view… allowing you to rest up and keep shopping, of course! With easy-access restrooms and air conditioned comfort, it’s the perfect place to take a break when you are tooling around the city, especially when it’s so hot. We headed directly to the cafeteria and yearning for something different, chose the traditional Spanish Ensalada Rusa, a non-traditional Ensalada Mexicana, and a couple of beers all for about $23. 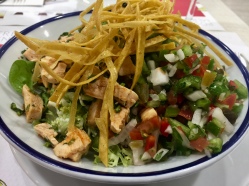 Though our tour of the city was short and the weather quite hot, we found that Córdoba was definitely a city we would enjoy visiting again.