Show Me the Euros! 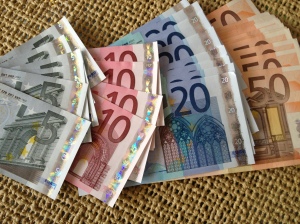 Usually when we travel overseas, we just exchange dollars for local currency when we get to the airport. However, for this trip I decided we needed to purchase some Euros ahead of time. We will be arriving  in Paris on a Saturday afternoon and will need a substantial sum in Euros to cover the balance owed for the rental of our apartment plus a hefty security deposit. I was concerned that it might be challenging to get this amount at the airport or somewhere in between there and the apartment. I didn’t want to fret about this during our 10 1/2 hour flight. I hope to be sleeping like a baby instead… yeah, right.

About 2 weeks ago I went to a branch of our bank near my workplace and inquired about ordering Euros. I was told I could order them any time during banking hours and that it would take about 3 business days for them to arrive. The exchange rate was somewhat higher than in France which adds up when your need a large amount. I was advised that I could check around for other rates such as those offered by the popular Travelex stores found in many shopping malls. Their exchange rate was even higher. Somewhere online I found some information stating that you could purchase Euros through AAA. It would be great if my membership actually provided me with some benefits I could use. Next step was to look into that. Turns out they no longer offer this service (of course!) but were willing to give me some advice = go to your bank or the travel exchange store in the mall. Hmmm… for this I pay AAA. Back to the bank I went, but a different branch this time — only to be amazed once again at the lack of service and knowledge that you get from any professional institution these days.

“Can I help you?” a too-young and obviously inexperienced customer service representative asked.

Upon her return, she explained that Euros had to be ordered no later than 2PM. When I informed her I had been told other wise, she went to ask again but came back with the same information. However, she told me that I could order them online and it would be much easier plus I could order them any time of the day or night. Why is this? She said she didn’t know but it had something to do with how the money is moved around in San Francisco — not my paraphrase, her answer! Since previous experiences wiring money through my account online hadn’t been very intuitive, I asked her to explain to me exactly how to go about ordering the Euros…

She stopped another employee and asked him but he stated he didn’t know either. She disappeared and finally returned with an informative post-it note which read: “Customer Service – Online Banking – Order FX”

She insisted there would only be three choices once I clicked on Customer Service which was partially true though each one had at least a dozen sub choices. I managed to navigate through the process fairly easily, but when I printed the confirmation page, I realized to my horror that the bank still had our 7-year old, no longer in service landline phone number from a previous residence listed. I had been told that the bank would call when the Euros arrived so I could pick them up. Frantically, I clicked back to the Customer Service tab and updated my profile with the correct phone number. I thought I’d better confirm that the people arranging for the Euros would be aware of this update so I used  Live Chat in an attempt to find out. There I learned that I needed to contact the Foreign Exchange Team by phone and that they were available until 6PM PT. Since it was only 5, I figured I could jump right on that and get to the bottom of the whole issue today. NOT! The recording I received stated that their hours ended at 5PM and they were closed. Well, there’s always another tomorrow, thank goodness!!

Epilogue: Finally got through all the red tape without any other snafus and voilá, I am now in possession of some beautiful new Euros bills. Unfortunately, they probably won’t last very long.