Some of the best travel experiences are the unplanned ones. Such was the case with our stopover in Bourges between the Dordogne and our return to Paris. You won’t find Bourges in any popular travel guidebook for France, but I found what seemed like a gem of a B & B there for such a great price that I booked two nights. When we arrived, I knew immediately that I’d made the right choice as far as accommodations were concerned. Once we settled in, we were able to enjoy our picnic lunch on the terrace under the shade of a huge redwood surrounded by gardens filled with every kind of plant and flower immaginable. This is also where we had our petit dejuner each morning. In addition, there is an immaculately decorated parlor available to the guests where we spent some time the next day writing and painting while enjoying a cup of tea. 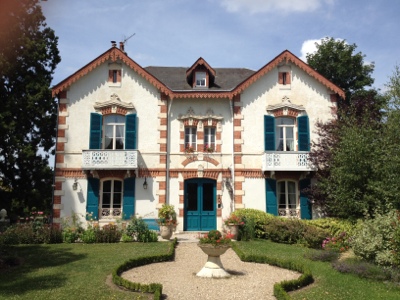 Oustal en Berry is a 19th century guest house run by a couple and their adorable Westie, Elliot. It consists of four guest rooms all named after famous French women. We stayed in the Colette room. She was an author who wrote many books, the most well-known to Americans is Gigi. Colette is actually credited with discovering Audrey Hepburn whom she personally chose to play the role of Gigi in the original Broadway play. However, most people my age will better remember the movie version starring Maurice Chevalier, Louis Jordan, and Leslie Caron. The plot is that of a young girl being trained as a courtesan which was a very controversial topic to American censors in 1958 so the producers were forced to turn it in to a musical. Ah, the good old days of innocent movies. The house itself is truly a work of art and we were pleased to have the opportunity to share and admire it for a couple of days. 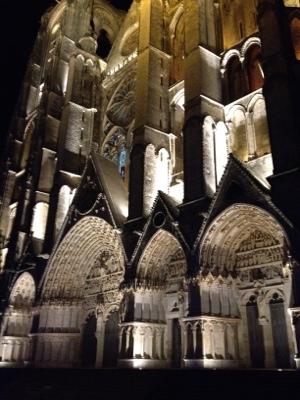 On to the surprises… We really had no sightseeing expectations for this city. The first evening of our stay we were told there was a special light show we should see. So after a bit of a rest, we set off for some dinner and the recommended walk through the old part of town (always the most interesting in every place you visit) to see the lights. Since it gets dark so late in France this time of year, we had to wait until at least 10 PM. Bourges has some intriguing architecture. One is the 19th century style that you can see in the B & B — bricks used to create an alternating striped design around the edges of the building and its windows. Another style common in the old town area is half-timbered houses. They remind me of something you might see in an alpine village. The third is Gothic which was the focus of the walking tour of lights. For a couple of hours on certain evenings during the summer, the most distinctive examples of this architecture are lit up with lights as well as projections of images related to the building or the period during which it was constructed. There are little blue lights that mark the pathway from place to place which you are supposed to follow, though, believe it or not, we found this a little challenging like everything else in France. Eventually we got on the right track so to speak. It was pretty impressive and made us realize there was more than meets the eye in Bourges.

The following day we were able to dedicate our “day off” from travel to visiting the interiors of two of the most extraordinary examples of Gothic architecture we have ever seen. The first was the Palais de Jacques Coeur, a financier in charge of trade and acquisitions for King Charles VII. As a shrewd businessman and with the king’s support, Jacques became very wealthy and decided to build himself a mansion in grand style sparing no expense. It is an enormous structure — one of the few examples of urban Gothic architecture that exists. We were allowed to tour many of its rooms freely on our own and it was a lot of fun to imagine what life must have been like. Jacques didn’t leave out a thing in the way of comforts. He even had indoor latrines and a sauna. Unfortunately, his glory days only lasted about 10 years before he was arrested for a number of crimes including poisoning the King’s mistress, coining light money, and fraud. Apparently these sorts of chenanigans have been going on for centuries. Those who were in debt to Jacques and had gotten fed up with his greedy ways showed no mercy and he was sentenced to death. Saved by a friendly Pope, he was given command of a crusade against the Turks during which he fell ill and died. Nevertheless, he remained a legendary figure in the history of France as he had successfully established direct trade between France and the Middle East for the very first time. 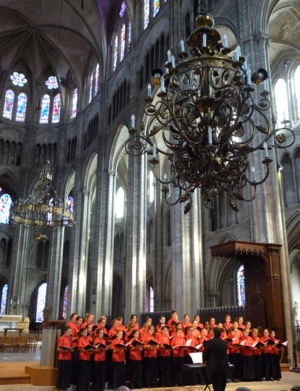 After this we moved on to (yes, another) cathedral. We really thought we would have seen enough of these by now, but we kept stumbling across the “the best example of this” and “the largest one of that” and we just couldn’t ignore the gigantic, imposing Cathédrale de Saint-Étienne. One of the things that makes this church unique is that it was designed without a transept which is the section of the building that sits crosswise and forms the typical cross design of most ancient churches. This was revolutionary for its time. What is most impressive, however, is the myriad of Gothic flourishes and details including a variety of intriguing and amusing gargoyles that you see everywhere you look. While we were visiting we happened upon a concert put on by a girls’ choir from St. Jean, a church we had seen in Lyon. It was delightful to hear their voices resonate within the incredible acoustics of the cathedral. I stayed to listen to the concert and Norman decided to take in a tour of another part of the cathedral. Over an hour later after the concert had concluded, I was still waiting for him. I thought he had gone to climb the 396 stairs of the North tower and I panicked when I saw a young woman take out a large iron key and lock the tower door. She assured me that no one was in the tower, but, really, what did she know? I mean, did she really check?? I started to think about how I would have to muster my French skills and courage to rescue my husband. Finally, I decided to walk outside the church and, low and behold, there he was on his way in. I had misunderstood his intentions and he had actually gone on a tour of the crypt which had just ended. Whew!! French emergency averted!

You never know what you are going to find in your travels. It’s important to keep an open mind. We were really happy to have discovered the belles of Bourges.

One thought on “Pleasant Surprises”