Six weeks of travel, inquiry and exploration mostly through the Aquitaine region of France. Every week a new gîte and a new part of the Aquitaine to explore. It has been an amazing adventure and we have loved every part of it. We have learned about and been to an extraordinary portion of the Aquitaine and while not every place was perfect, each one served to define more clearly where we want to make our final search for a home in France. We are now in negotiations for the house we will stay in for two months next summer and are looking forward to it with great anticipation.

But now we are in one of the most beautiful cities inall of Spain, San Sebastián. San Sebastián (Spanish: [san seβasˈtjan]; French: Saint-Sébastien) or Donostia (Basque: [doˈnos̺tia]) is a coastal city and municipality located in the Basque Autonomous Community in the northeast of Spain. It is situated on the coast of the Bay of Biscay, 20 km (12 miles) from the French border. Capital city of the province of Gipuzkoa, the municipality’s population is 186,409 (2012), with its metropolitan area reaching 436,500 (2010).

The first time we visited the city in 2012, was for only a day. Even so we were very impressed. It is such a beautiful city. With modern buildings, tree-lined streets, broad pedestrian walkways, beautiful plazas with impressive water fountains, dedicated bicycle lanes and lovely wide beaches that line the curved harbor, San Sebastían is inviting and mesmerizes you with its beauty. The beaches are caressed by emerald green waves and a cool breeze that soothes the mind and refreshes the body. Since we have worked so much on exploring and getting to understand the southwest part of France, this is our reward. Time to relax and reflect on what the future holds for us.

Since we knew that we wanted to return here, Cheryl arranged for an apartment just a few minutes walk to the beach. She hit five stars this time! While the apartment is small, it is a spotless, modern, and beautifully appointed. The owners spared no expense in remodeling it. From the solid hardwood doors and flooring to the high gloss and textured tiles in the bathrooms, double glazed windows and matching cabinetry, modern kitchen and very comfortable furnishings, this is a deluxe accommodation we feel fortunate to inhabit for a few days. It sits on the fourth floor of a large modern complex with a park like central plaza at its core. Parking is below the complex with a dedicated parking space. The neighborhood where it is located is in the southern end of the bay and is one of the wealthiest in the city. The city buses can be boarded just a block away so there is no need to even move your car. 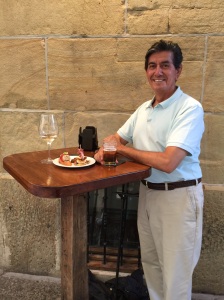 On our first night we went to the Parte Vieja (old town) to wander the narrow streets. Stepping into a few local bars, we sampled the pintxos (tapas) and drank a zurrito (6 oz. glass of local draft beer) and a txakoli (a Basque wine made sparkling by pouring it from high above the head into a large wine glass). Pintxos (pronounced peen-chos) are single servings of all kinds and combinations of Basque appetizers usually served on sliced baguette. Delicious and inexpensive, the idea is to wander from one place to another sampling one or two pintxos, then try to get a table on the street and people watch for a while before moving onto the next location. We had a fabulous time and plan to return one or two more times during our stay.

The next day we decided that we should get a bird’s eye view of the entire city. Only a five minute walk from our apartment, the funicular took us up to the top of Monte Igueldo where we got a spectacular view of the entire city, beaches, and harbor. At the very top of the mountain is an ancient stone tower where you can see far out into the Atlantic, a long way down the coast and all of the surrounding countryside of this beautiful land. 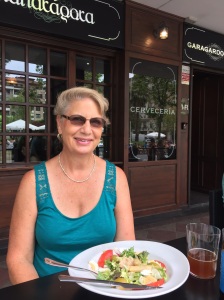 After such a beautiful view we walked along the promenade with its tree lined walkway and benches facing the beach where you could idle away the hours watching people stroll by or sunbathers enjoying the sandy beach. After quite a while, we realized that we hadn’t eaten much and should probably have some lunch. So off we went back to our neighborhood to look for someplace to eat. We were a little concerned because in France everything closes down between 12:30 and 3:00 or 4:00 and many places aren’t even open on Sundays. It wasn’t even 3:00 yet. Well, lucky us, here there are many cafes and bars that are open and serve food all day long. We decided to walk around an area a few blocks away from the beach and found a very nice restaurant, sat under the shade of the portico, and had a long relaxing lunch.

Later that evening we went to Gros, a neighborhood on the other side of the river Urumea where Zurriola Beach, the aquarium, and a large concert venue are located. On the way back, we braved the crowds of the Jazzaldia Jazz Festival and stopped again in the Parte Vieja to sample a few more pintxos.