There’s no denying that the west coast is replete with natural beauty. We can verify that. Early in our adult lives, we unknowingly spent several years on opposite sides of Washington state enjoying the magnificent surrounds of Seattle and Pullman respectively. Both native Californians, we lived many years throughout the Golden State. During the 24 years we have been together, some of our most memorable experiences were photographing Yosemite, Lake Tahoe, Joshua Tree, Death Valley, the Coachella Valley, and the Monterey Peninsula resulting in some amazing images that hang on our walls.

Our new home state of Oregon possesses its own unique natural beauty with abundant scenic landmarks and breathtaking landscapes all within easy reach. In fact, it was on our 2001 six-week, six thousand mile western driving tour that we explored the full length of the Oregon coast and also discovered Eugene. Though our stay here was very brief, it left a lasting impression on us and now that we have lived here for awhile, we know why.

Rugged ocean shores, meandering rivers, and gleaming lakes abound surrounded by snow-capped mountains creating… my favorite — waterfalls galore. They are everywhere! And they are spectacular!! Last spring, we ventured out to Silver Falls State Park which is considered the “crown jewel” of Oregon State Parks. It certainly lives up to its reputation. Encompassing 9,200 acres, it is effectively the largest park in the state. The popular Trail of Ten Falls is a 7.2 mile loop with an elevation change of 800 feet. While this is very doable in one fell swoop for the average hiker, we’re not your “average hiker” anymore. So we broke it up into three smaller loops in order to take in all ten falls with plenty of time for photography along the way as well as simply soaking up the experience. This plan was made possible by reserving a three-night stay in the Calypso Cottage at Silver Falls Lodge located nearby. The cottage was built in 1945 and was originally used as a staff residence. Recently, it received an upscale renovation and is now open to the public — quite nice if you like to camp the way I do.

The park is located in the foothills of the Cascade Mountains. Hikers are surrounded by a dense forest of both deciduous and evergreen trees. Descending to the bottom of the canyon, waterfalls seem to appear around every bend flowing over the rocky canyon walls.

At 177 feet, South Falls is the tallest and affords the opportunity to walk behind it. Fortunately, it happens to be the easiest hike so everyone can enjoy it. 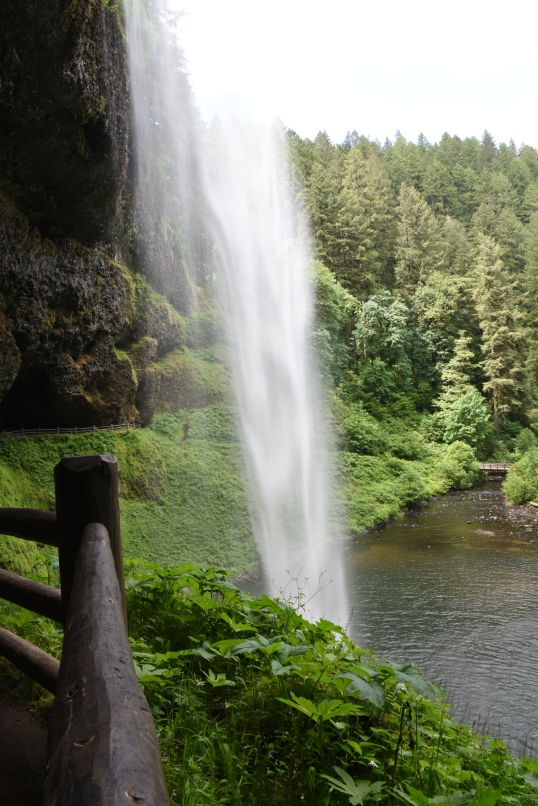 Upper North Falls was our favorite. It’s only 65 feet tall but pours into a large pool one can imagine would be so inviting for a dip during the warmer months. 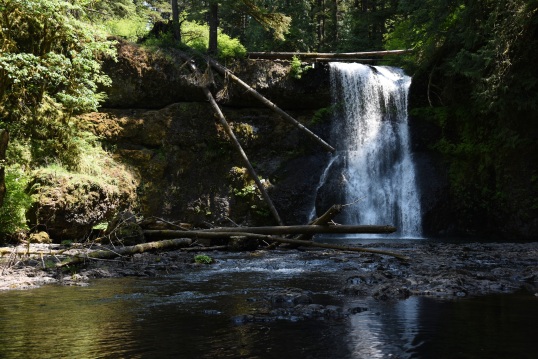 Silver Falls is calling us back for a few days at the end of this month. We’re hoping to catch some shades of autumn along with a different seasonal perspective on those spectacular waterfalls. Stay tuned!